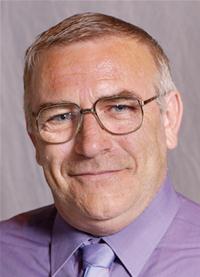 Councillor Mutton was Lord Mayor of Coventry in 1997/98. He was Deputy Leader from 2000 to 2003, Leader from 2003 to 2004, Leader of the opposition from 2004 to 2010 and then Leader of the Council from 2010 to 2013. He has been a councillor since 1984 and serves the Binley and Willenhall Ward. Councillor Mutton is a ‘Coventry kid’ and was born in the city on the 20th September 1947. He attended Manor Park Junior and Infants School and Whitley Abbey Comprehensive.

Councillor Mutton is a lifelong trade unionist, first as a shop steward at the City Engineers depot for the T&GWU and also for USDAW at the Co-op Dairy in Coventry. He has been a Labour Party member for over 30 years.

When he was younger Councillor Mutton was a useful footballer and played for Coventry City’s youth team and reserves from 1963 through to 1965. Later he went on to play as a semi-professional for St Neots and Tring Town.  He was a season ticket holder for 30 years.  Councillor Mutton also enjoys fishing and likes going further afield, he has fished in Denmark, Ireland, Holland, France, Cuba, Kenya, Mozambique and South Africa.

For many years Councillor Mutton has taken a group of young athletes and swimmers to the International Children’s Games - in 2005 it was held in Coventry, the first time the Games had been held in England. In the past Coventry has been the only English city represented. Previous Games have been in Spain, Greece, Romania, Canada, Poland, Hungary, Austria, USA, Thailand, Iceland, Bahrain, South Korea and Russia.

Councillor Mutton has strong links with the local Irish community through the city’s links with the Mayo Association and also through work with the Dublin based charity Rehab-care - an organisation dedicated to care for elderly expatriate Irish citizens. He developed these relationships during his term as Lord Mayor although he doesn’t have any Irish family connections himself.

Councillor Mutton has sold his milk round business so that he can work full time on council business. He lives with his wife Mal and they have two sons and nine grandchildren and three great-grandchildren.